Economic Crisis in Afghanistan and the Rise of Bitcoin Adoption There has been a significant rise in bitcoin adoption since the Taliban took control of most of Afghanistan. Citizens are desperate to maintain their financial stability in the face of rising prices and cash shortages after the fall of their economic system.

The Afghan local currency has seen a sharp depression in the last few weeks, pushing people to find alternatives and adopt Bitcoin. Unlike any other currency, Bitcoin has the unique power to preserve value and increase purchasing power due to its independent decentralized nature.

On August 15, many residents of  Kabul rushed to their nearest banks to withdraw money as the Taliban took over their capital city, demanding the government’s surrender.

“Go back; we don’t have cash,” said the New Kabul Bank as hundreds of Kabul residents rushed to the bank to withdraw their money given their dangerous crisis, reported by CBS News on 15th August 2021.

“Protesters at New Kabul Bank said that even though banks reopened three days ago, no one has been able to withdraw cash,” as reported by Al Jazeera English on Twitter a few days ago.

The digital nature of cryptocurrencies has provided a haven to all the Afghans who seek to gain some monetary sovereignty to flee the country, according to CNBC and data from Chainalysis. Out of all the cryptocurrencies, Bitcoin seems to be the most sought-after solution for Afghans trying to preserve their money and wealth and flee the country eventually. Others who are desperate to increase their income during this crisis are trying their luck with gambling on cryptocurrencies.
Despite harsh barriers such as limited internet access and frequent power surges that Afghanistan citizens have to face in order to adopt Bitcoin, Afghanistan ranks in the 20th position in the Global Bitcoin Adoption Index 2021 by Chainalysis. The country ranks even higher at 7th position in peer-to-peer trading terms. 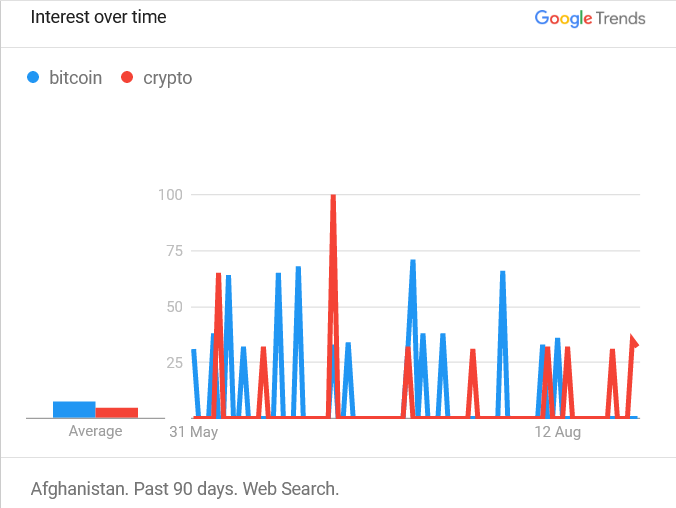 Farhan Hotak, a 22-year-old Afghan, told CNBC that he has been keeping a very keen eye on his Binance portfolio, as his local currency reaches record lows and countrywide bank closures make it near impossible to withdraw cash.

Farhan is among the very few Afghans who will be safe from the currency depreciation crisis as a result of the Taliban’s takeover. The deposited money in the crypto platform offers him peace of mind and safe well-being in his foreseeable future.

Musa Ramin is another young 27-year-old Afghan citizen who had invested a part of his savings into cryptocurrencies like Bitcoin just days before the Kabul takeover.

He first invested in cryptocurrencies after he saw his money being washed away due to rapidly decreasing currency value. Therefore, decentralized digital money provided him the means to safeguard his hard-earned money and escape the possibility of going bankrupt due to the current situation.

Ramin said that thanks to Youtube tutorials and Twitter, he got the hang of managing digital assets after he lost a significant amount of money during the Covid-induced currency depreciation in Lira (Turkish currency) when he was stuck in Turkey for six months due to covid lockdown.

Roya Mahboob, the first female Afghan CEO in tech, among TIME’s most influential people in the world and one of the very first entrepreneurs to showcase Bitcoin to the people of Afghanistan, is on the frontier of promoting the adoption of Bitcoin in her country since 2013 and says that it is needed in her origin country now more than ever.
Check out her story as she takes you on her journey for financial sovereignty and making her country free again.

As Afghans are being denied the right to access their fiat savings due to cash shortages, a small proportion of people have already started getting involved in Bitcoin investing, placing their family and hard-earned savings to the most tangible form of money they can find.

Bitcoin is uniquely placed to renew freedom and sovereignty worldwide regardless of your origin or nationality. It’s perfect for people living in war zones, oppressive regimes, monetary colonialism, and critical economic policies.

Gradually, Bitcoin can conserve value and improve purchasing power than other cryptocurrencies and fiat currencies. With a formularized monetary policy and a restricted supply, the world’s only peer-to-peer digital cash is specially equipped to empower the unbanked, living under authoritarian regimes, and facing adverse economic policies and currency degeneracy.

It is the ultimate answer to help secure financial sovereignty and safeguard wealth for the people of Afghanistan and their future generations.