Rektmber is over, Uptober has started – Is the Bitcoin bull market on in October?

Home » All Posts » Rektmber is over, Uptober has started – Is the Bitcoin bull market on in October? It is no news that some of the top cryptocurrencies have had a few rough weeks from mid-August to the end of September. And if we go by patterns seen in the past, coins like BTC and ETH have always had a rough September with a strong rebound in October almost every year since 2013. Will this month be any different? 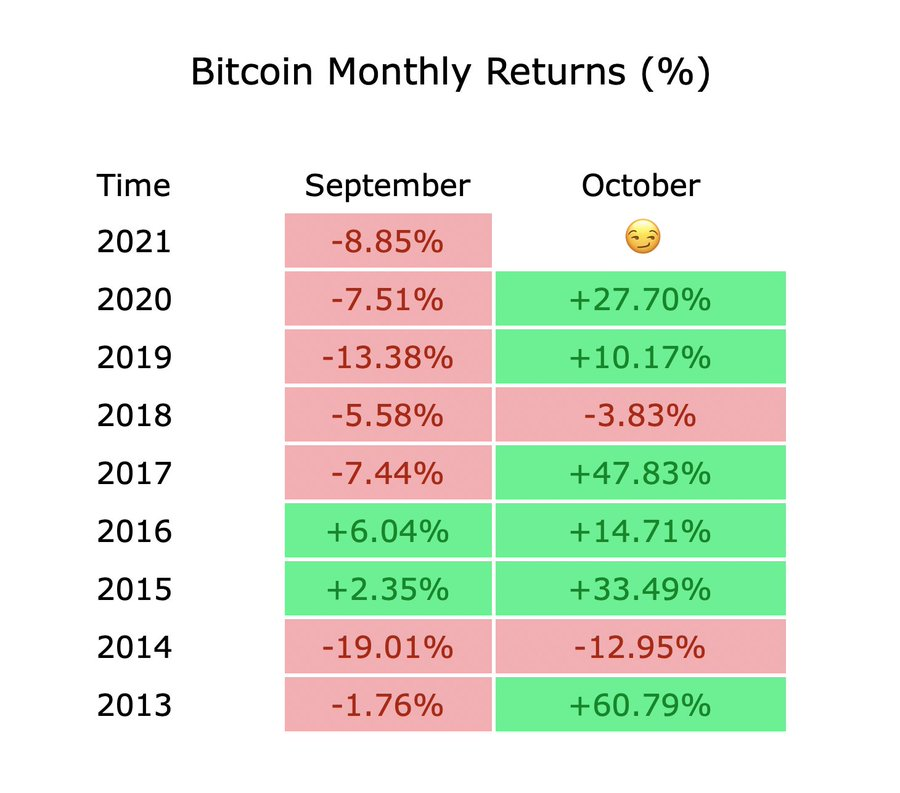 Despite a solid comeback surge right before its close, Bitcoin (BTC) failed to break the “September curse”, with its price plummeting by a little over 7% at the start of the month. However, Bitcoin appears to be making a rebound in October, a month renowned for dramatic bullish reversals.

According to Bybt data, Bitcoin has ended October in profit most of the time since 2013, with a success of over 77%. After completing September 2020 at around $10,800, the cryptocurrency soared by 28% to heights above $13,500, following a roughly 7.5 % dip. Similarly, despite dropping by over 14% the previous month, Bitcoin rose by over 10% by the end of October 2019. As a result, September appeared to be a sell-off period for traders, with losses seven out of nine times since 2013.

On the other hand, October appears to be a dip-buying month, meaning that traders may wind up boosting Bitcoin’s price higher by the end of the month.

The October pattern emerges again despite warning signals such as China’s growing crackdown of the crypto market and the United States’ tighter regulatory stance on crypto exchanges.

Arguably some of the most significant factors in the growth of BTC from around $4000 in March 2020 to almost $65000 in April were the loose monetary policies coupled with the almost non-existent interest rates of the U.S. Central Bank, but now with the prospects of the U.S. Federal Reserve limiting its bond purchasing program to $120 Billion a month seems to be hindering BTC’s positive outlook. However, CryptoCompare, a cryptocurrency data tracking website, said that volumes related to digital asset investment products increased 9.6% in September.

Short-term price swings are difficult to relate to a particular event, and with crypto’s historic run over the last 12 months, downturns are to be expected. Ethereum, the highest valued cryptocurrency after bitcoin, has increased in value by nearly 830% in the previous year. Traders are now looking to buy the September price drop. ETH and BTC both rocketed over 9% on October 1st.

In late August, Ethereum split into two distinct chains after a fault in the software that most people use to connect to the blockchain was exploited. This was not the first time the network had been compromised. Even yet, Ethereum, which serves as the foundation for a wide range of crypto projects such as non-fungible tokens (NFTs), blockchain-based smart contracts, and decentralised finance (DeFi), faces some significant challenges in fending off the competition. September ups and downs signal a particularly turbulent period for the Ethereum ecosystem, which has investors and developers worried.

The network’s speed and excessive transaction fees are still a problem. The August “London” upgrade was expected to reduce transaction fee volatility, although it only had a minor impact. In the meantime, alternative blockchains called “Ethereum killers” are capitalising on Ethereum’s shortcomings.

However, product inflows increased to $69.7 million per week, peaking since May 2021. For the first time since early September, the bitcoin price is reaching $55,000 per bitcoin, while the ethereum price is approaching $3,500 per ether after plummeting as low as $2,600 last month. Now, bitcoin, ethereum, and cryptocurrency bulls are speculating that a long-awaited U.S. bitcoin exchange-traded fund (ETF) could be approved in October, with decisions on a slew of ETF applications coming.

This is significant news to crypto traders worldwide as this can attract a lot of attention and investment on top of the October gains and could mean a very profitable month or even a quarter to end the year with.

Strong performances in the fourth quarter have been expected since 2013, and the anticipation that this trend will continue this year can become a self-fulfilling prophecy. New all-time highs will probably be set in Q4, notably as on-chain data, especially in the case of bitcoin. It appears that a robust bull market continuation is here.

Disclaimer: Cryptocurrency is not a legal tender and is currently unregulated. Kindly ensure that you undertake sufficient risk assessment when trading cryptocurrencies as they are often subject to high price volatility. The information provided in this section doesn't represent any investment advice or WazirX's official position. WazirX reserves the right in its sole discretion to amend or change this blog post at any time and for any reasons without prior notice.
Participate in the Indian Crypto Movement. Share:
CryptocurrenciesOpinionTrading