By Rony RoySeptember 14, 2021No Comments

Home » All Posts » DEX for Dummies

Over the years, the crypto sector has been one of the fastest-growing domains on the planet. There are around 2000 cryptocurrencies available now, with many backed by very promising and ground-breaking ideas. Nonetheless, centralized platforms have been some of the most frequent and accessible means of dealing with these assets.

But to better understand decentralized exchanges, we must first begin with what decentralization actually is. 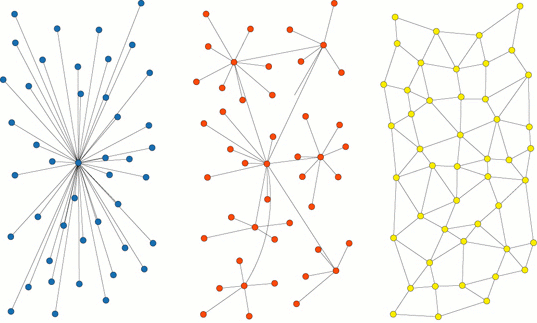 These days, we hear a lot about decentralization. But what does it actually mean? The images above depict three different types of network architectures. The networks in the diagrams can reflect any real-world network, such as social relationships, computer networks, and, of course, financial transactions, among other things. Each node (also known as a peer) is a self-contained entity (e.g., a person in society, a computer in computer networks, a cell in biological systems). Each link is supposed to indicate a connection between two nodes. In society, for example, there is a relationship between two people who are friends. A connection occurs in computer networks between two nodes that communicate directly with each other.

The diagram on the left depicts an entirely centralized organization. All nodes interact with one another via the node in the middle. In CEXes, for example, all transactions are routed through central servers managed by the exchanges themselves.

A hybrid system is depicted in the center diagram. There are numerous nodes in the system that act as hubs. Communication between nodes must pass via these hubs. Such approaches are used by the latest DEXes (for example, 0x and KyberNetwork) for order matching and liquidity supply. In 0x, for example, order matching must pass via a restricted number of relayers acting as hubs. Meanwhile, KyberNetwork reserves act as liquidity centers.

The image on the right depicts a completely decentralized system. Each node is linked to a small number of other nodes and functions as an equal member in the network. There are no centralized entities like in the leftmost figure, nor are there hubs like in the center one. DEXes should ideally fulfill such goals for all functionalities, including order matching, transaction settlement, and so on.

What is a DEX (Decentralized Exchange), and how is it different?

In the most basic sense, a decentralized exchange provides a new sort of pair-matching service, allowing traders to place orders and trade cryptocurrencies without the need for an intermediary organization to manage the funds.

Because of its dependence on self-executing smart contracts, this decentralized dynamic system enables quick trades, typically at a significantly cheaper cost than what is offered on centralized crypto exchanges.

Centralized exchanges require customers to make deposits and then issue an IOU ( which stands for “I owe you” and refers to an informal document that acknowledges a debt one party owes to another) that is freely exchanged on the exchange. When a client requests a withdrawal, these IOUs are converted to cryptocurrency and delivered to the beneficial owner.

In addition, centralized cryptocurrency exchanges keep the crypto assets of their customers, which may include both the buyer and the seller, and they control the private keys required to access the funds.

Why should one use a Decentralized Exchange?

The traditional order book is replaced with liquidity pools that are pre-funded for both crypto assets in a trading pair when using AMMs. The liquidity is provided by a network of users, who can earn passive income on their deposits via trading fees depending on the percent of the liquidity pool that they stake in.

The custody is distributed across the entire user base with a DEX, making attacks far more expensive, less rewarding, and much more difficult. Because the individual users entirely manage the funds, the lack of an intermediary also implies that most DEXs have low counterparty risk because the funds are fully owned by the individual users, offering complete freedom and authority to the individual crypto traders.

While decentralized exchanges have several innovative benefits, they also have a few downsides.

Cryptocurrency exchanges are an essential source of liquidity for the global cryptocurrency market, supporting tens of billions of dollars in daily trade activity. If you’ve bought cryptocurrencies in the past, you’ve undoubtedly done it through exchanges like WazirX and Binance.

In addition, DEX’s might appear quite complicated to an untrained eye. Plus, a user needs to manage his/her private keys and funds properly, which is often not time and cost-effective for a lot of users. Hence, it can be considered that there is an intellectual barrier to entry when it comes to DEXes.

However, the crypto industry is known for its constant innovations, and soon enough, a user-friendly platform will emerge, built by an unknown/known start-up somewhere.

Now, a new generation of exchanges with decentralization as a key principle is gaining popularity and attention from the crypto world. Even Square and Twitter CEO Jack Dorsey recently stated to his 5.6 million social media followers that he is working on a Cryptocurrency decentralized exchange (BTC).