How to read Crypto Candlestick Charts?

Home » All Posts » How to read Crypto Candlestick Charts? For a newcomer to trading or investing, reading charts may be difficult. Certain individuals trust their instincts and make investment decisions based on them. While this strategy may work for a short period of time in a bull market, it is unlikely to be successful in the long run.

These charts, which feature a wide range of patterns and are often complex, might be confusing for many new investors. However, even simple awareness of how to read and recognise these patterns can provide traders with price action insights to assist them to plan their next moves.

When it comes to candlestick charts, time is represented by the horizontal axis, and the vertical axis represents price data. With candles, you can see more detail than with other types of graphs, such as bar graphs. You can see the asset’s highest and lowest prices, as well as it’s opening and closing prices, all in a single glance.

What are Candlestick Charts?

In finance, a candlestick chart is a type of graph that shows the price fluctuations of an asset over a specific period of time in a visually appealing way. It’s made up of candlesticks, each of which represents a certain period of time. When used as a time symbol, candlesticks can represent anything from a few seconds to many years.

Using candlesticks, you can see whether the price movement in a market was positive or negative and by how much. Candlesticks are extremely useful. It’s also worth noting that cryptocurrency markets operate 24 hours a day in contrast to stock markets. In other words, “open”, and “close” prices refer to the price at the beginning and end of the specified interval, respectively.

Anatomy of a Candlestick 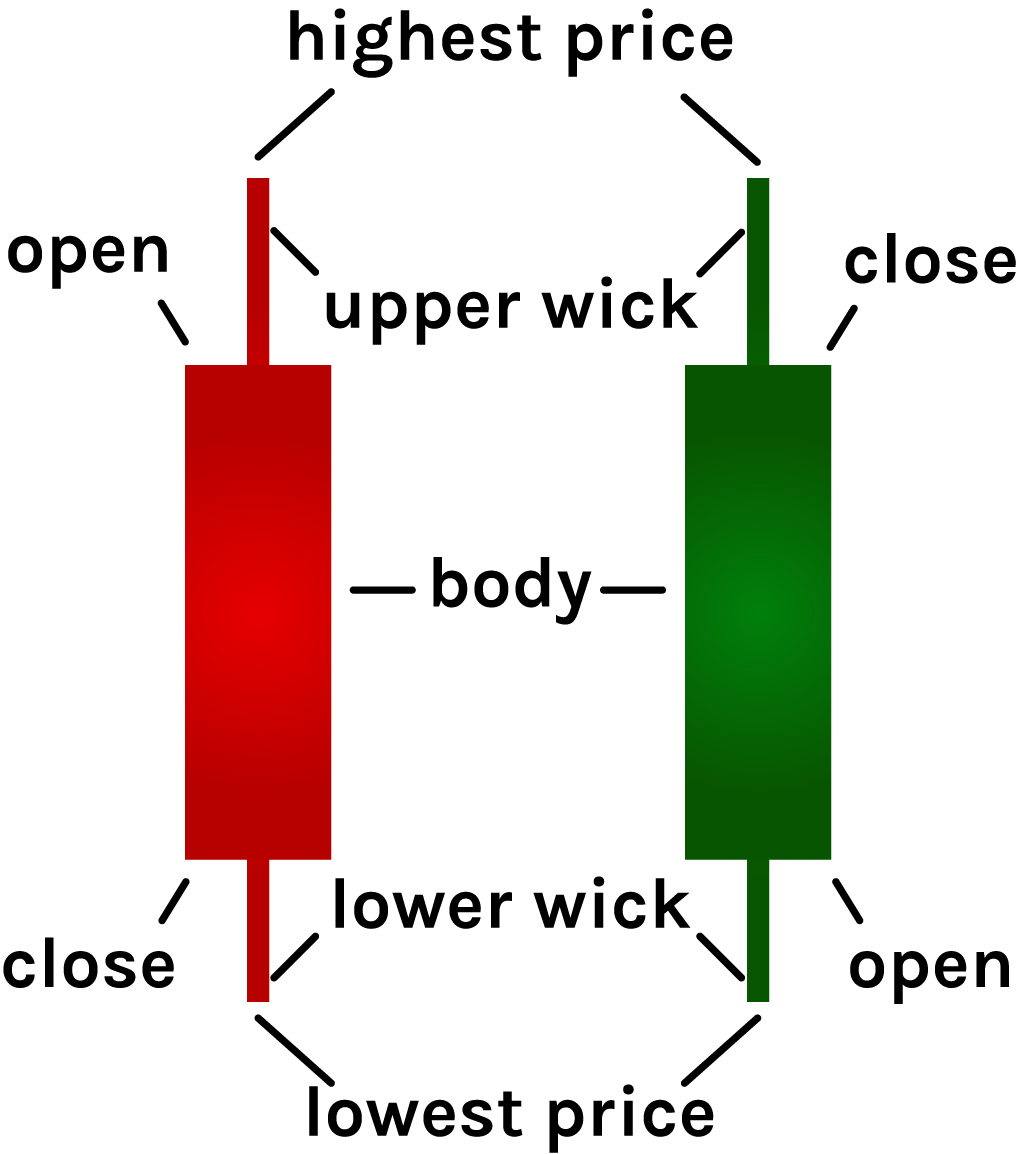 There is a lot more than just price movement that candlesticks can show you with their patterns. In order to evaluate market sentiment and make predictions regarding the future direction of the market, seasoned traders look for patterns.

The hammer is one of the simplest patterns to recognise. This pattern, like a hammer, is formed by a candlestick with a long lower wick at the bottom of a downtrend. Typically, the body is small, with little to no upper wick. A hammer can be red or green.

A hammer could indicate a strong trend reversal and a potential price surge. This pattern shows strong selling pressure, but buying pressure also regained control of the price action during the same time period. 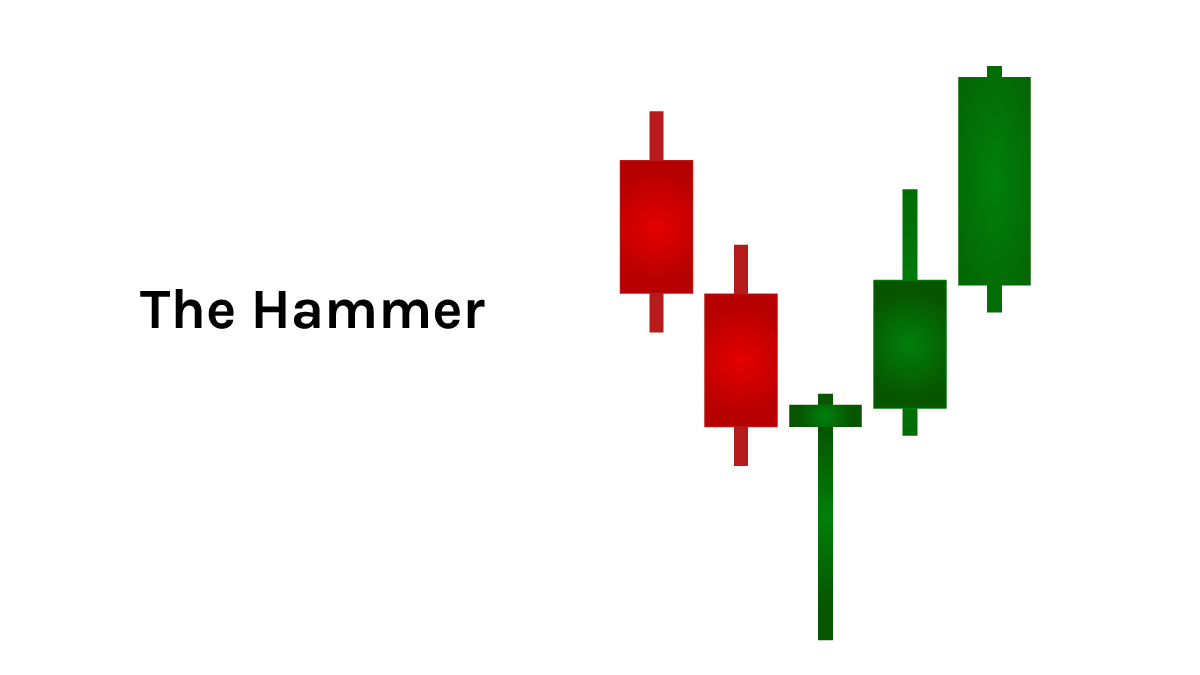 It’s also known as the inverse hammer, and it works similarly to a hammer except that the wick is located above the body rather than below it. The upper wick, similar to a hammer, should be at least double the size of the body.

At the bottom of a downtrend, an inverted hammer may indicate a possible upward reversal. Even though sellers were able to force the price down around the open, the upper wick signals the price has now halted moving downward. As such, the inverted hammer may indicate that buyers are prepared to take over the control of the market in the near future. 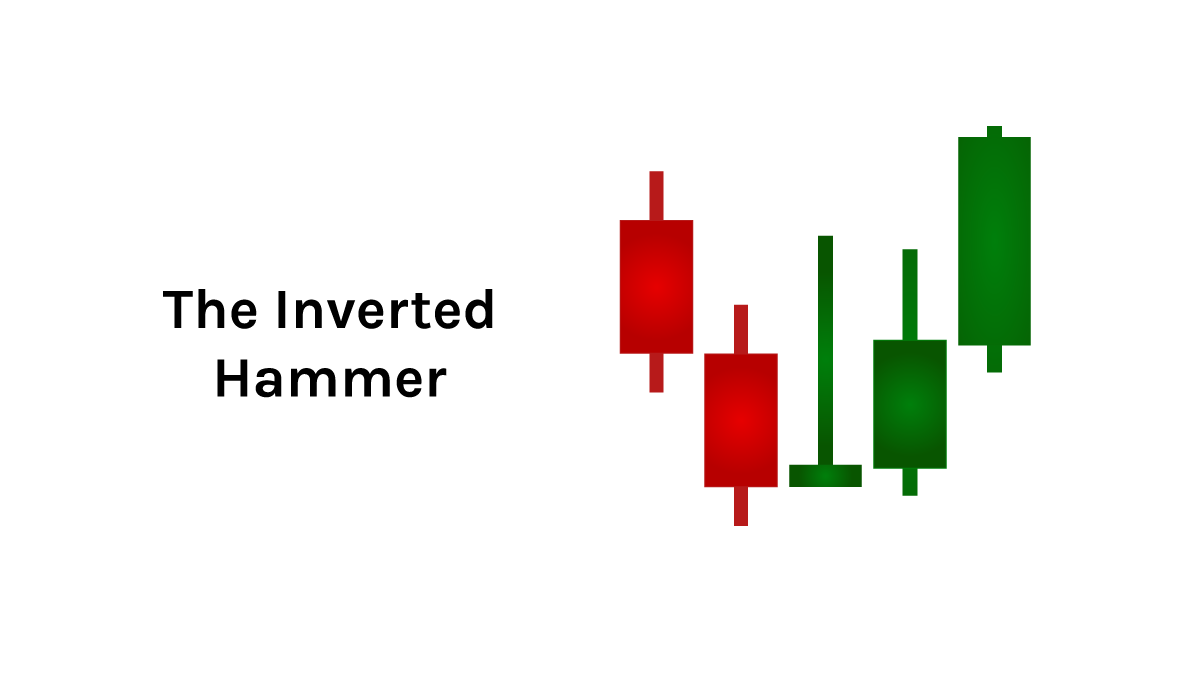 The three white soldiers pattern is made up of three green candlesticks that open within the body of the preceding candle and close above the previous candle’s high.

Typically, the candlesticks should not have long lower wicks, which indicates that the price is rising due to constant buying pressure. The length of the candles and the height of the wicks can be utilised to determine whether or not the trend will continue or retrace. 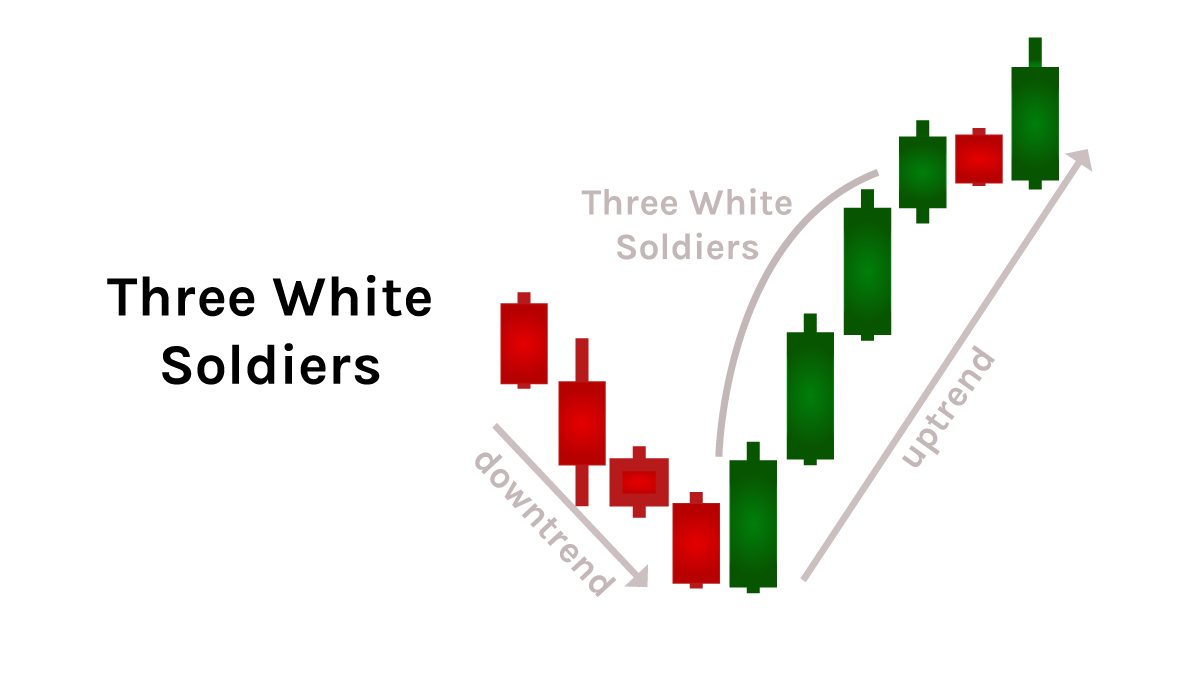 A long red candle followed by a small green candle that is entirely contained within the previous candle’s body represents a bullish harami.

The bullish harami can last for two or more days, and it’s a sign that the selling pressure is weakening and that the downtrend may be nearing its end. 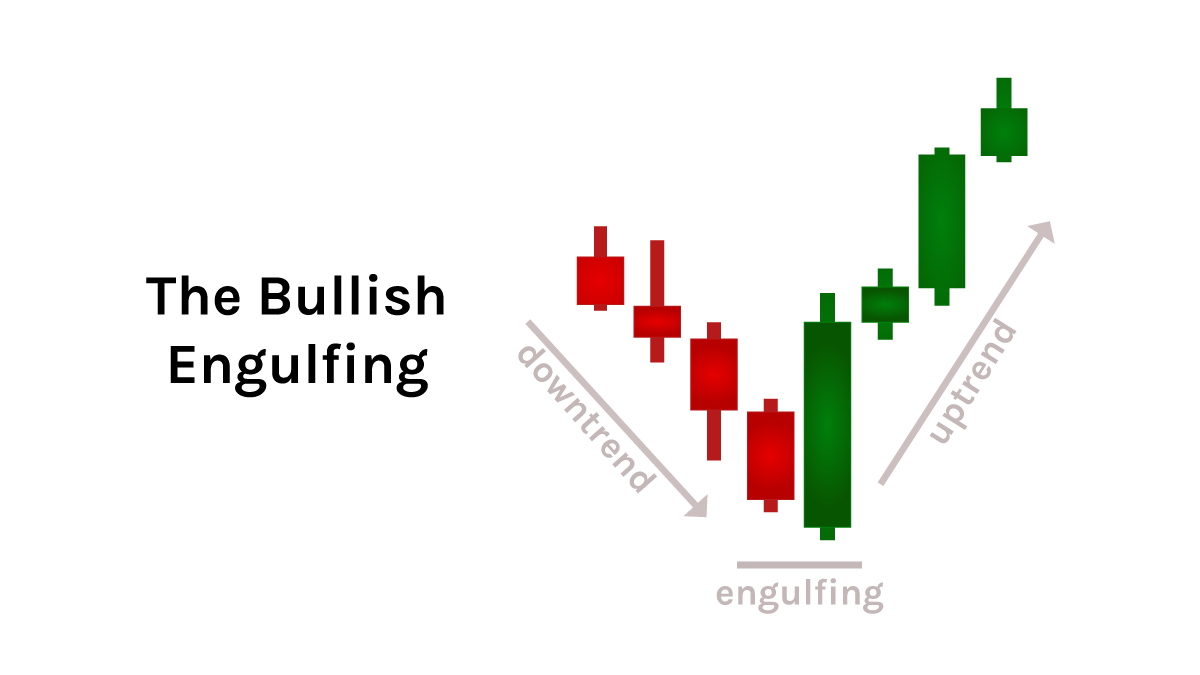 Three candles in a downtrend form the Morning star pattern. The first one is a long red candle, which indicates bearish momentum. On the other hand, the star has extremely long wicks, a short body, and closes below its previous closing price. The third Candle closes above the first candle’s midpoint and is a bullish candle.

Whenever a star appears, it indicates that the current trend has peaked, and an upswing will soon begin. 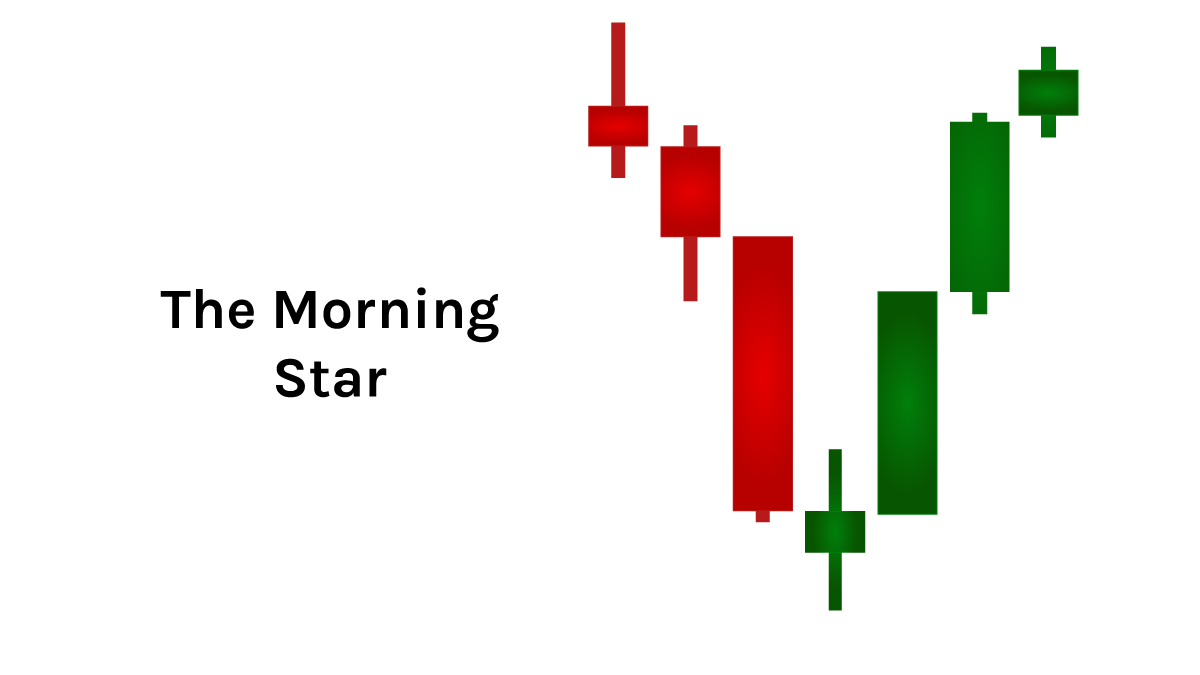 The hanging man is the bearish counterpart to the hammer. It is most frequently formed at the end of an uptrend and has a small body and a long upper wick.

The lower wick shows that a significant sell-off occurred, but bulls seized control and drove the market higher. Keeping this in mind, the sell-off following a sustained rally may serve as a warning that the bulls are about to lose control of the market. 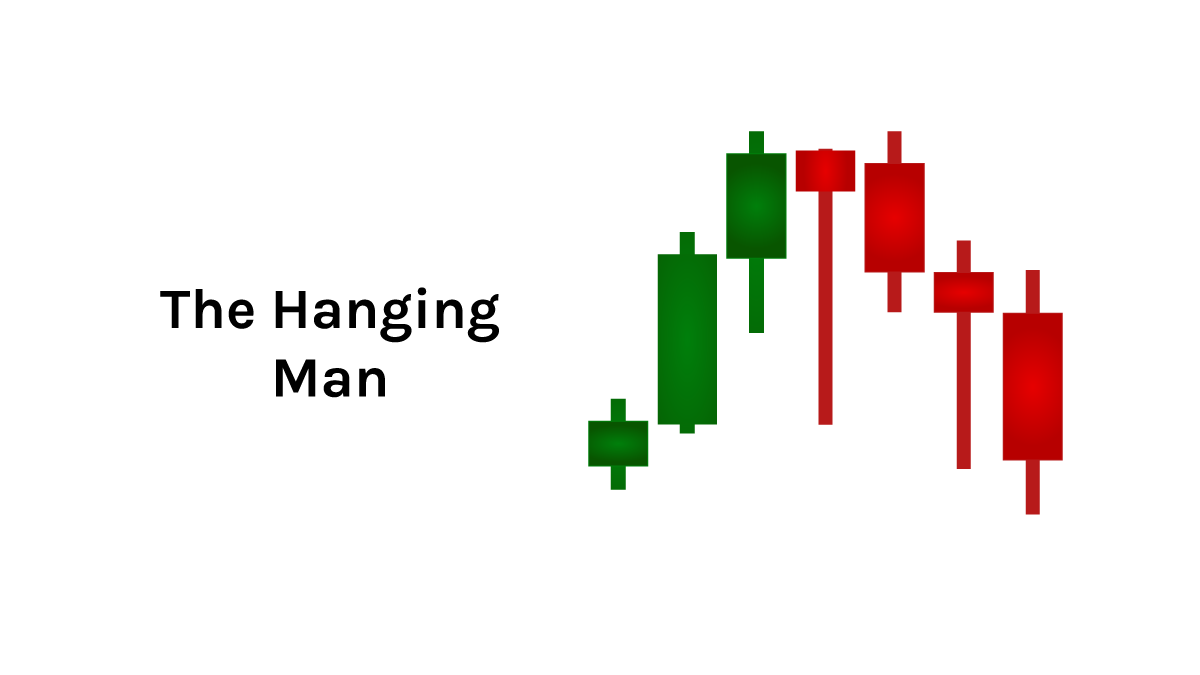 The Shooting Star is composed of a single candlestick with a small body and a smaller wick. In comparison, the upper wick is extremely lengthy. In contrary to the pretty similar Inverted Hammer pattern, this one comes at the peak of an uptrend.

This pattern implies a significant price rejection following a major increase in price. The Shooting Star is frequently used as a bearish reversal signal. 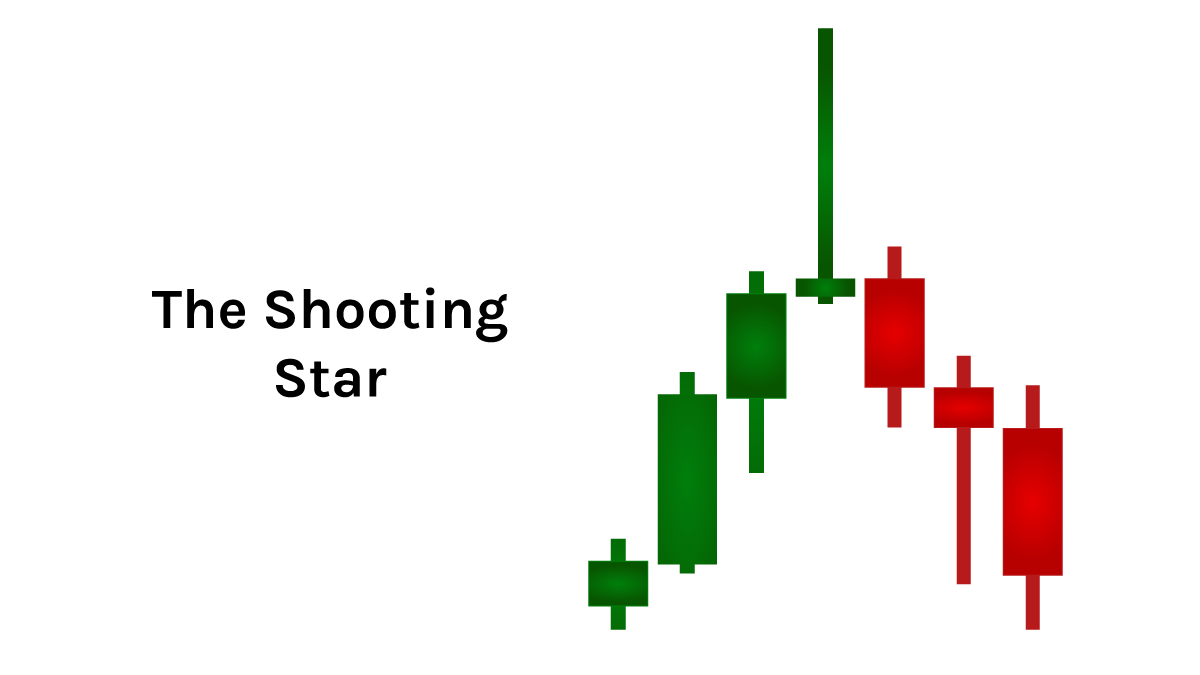 It’s called a “bearish harami” when the first candle is green and the second one is red, and the bodies of both candles are completely enclosed within one another.

The bearish harami can take up to two days to develop, emerges at the end of an uptrend, and maybe an indication that buying pressure is weakening. 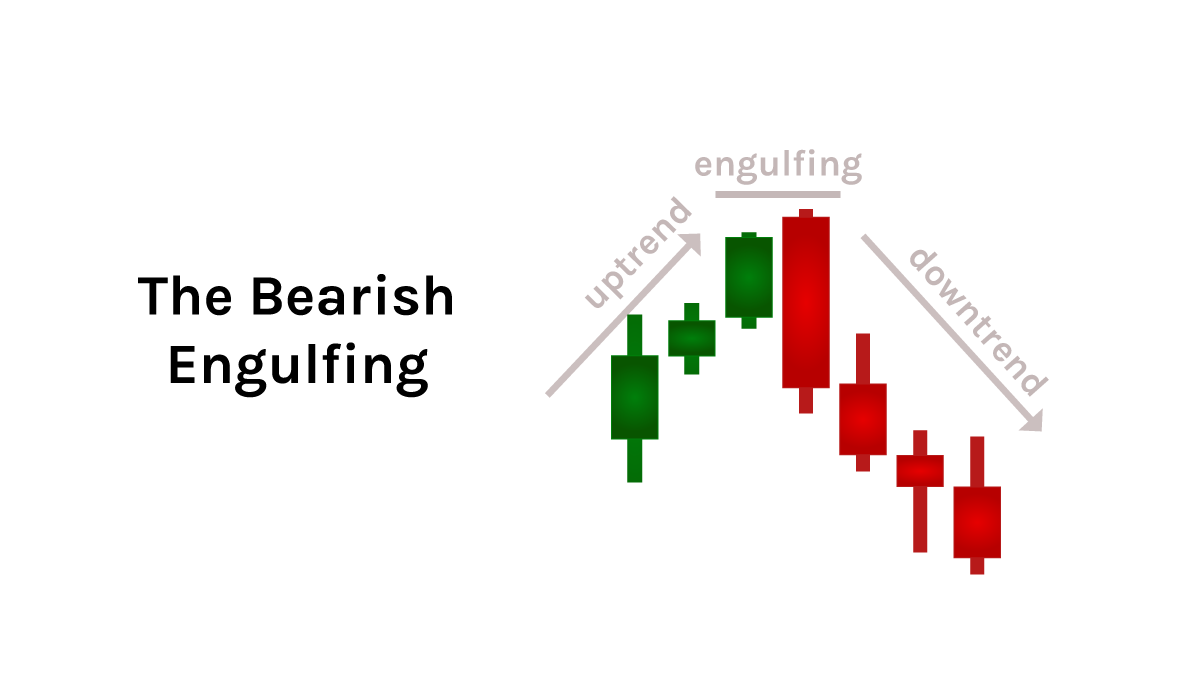 It’s made up of three successive red candlesticks that open within the previous candle’s body and close at a level lower than the candle’s low.

That would be a bear’s equivalent of three white soldiers. Longer wicks on these candlesticks indicate continual selling pressure driving the price lower. Size and length of wicks are good indicators of whether the trend will continue. 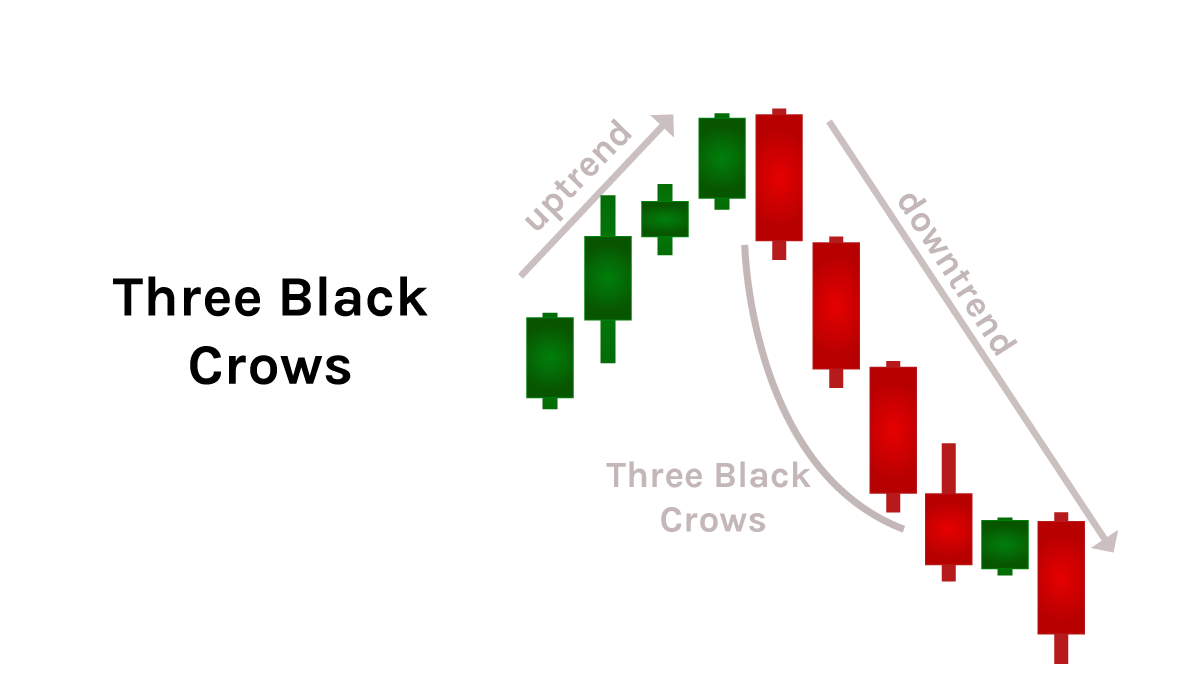 When a red candle opens above the closing price of a preceding green candle but closes below the midpoint of that candle, we have a Dark Cloud Cover pattern. When this pattern appears in an uptrend, it usually results in a new high.

This chart pattern can mean one of two things: either a downturn is likely or the current rally has come to an end. Traders interpret this pattern as a sell signal in both circumstances. 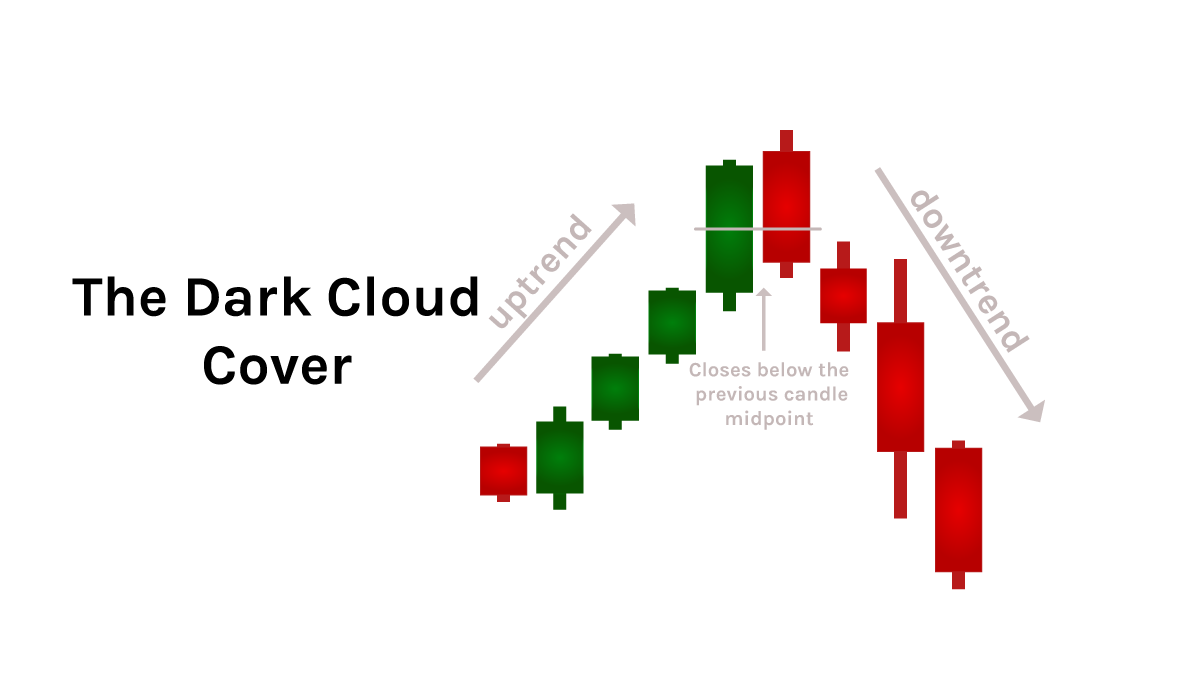 As opposed to ordinary line charts, Candlestick charts provide a great deal of information and is an excellent trading tool. They do, however, have numerous limitations when used separately. Hence they are frequently used with other technical indicators like the RSI or the Moving Average.

Disclaimer: Cryptocurrency is not a legal tender and is currently unregulated. Kindly ensure that you undertake sufficient risk assessment when trading cryptocurrencies as they are often subject to high price volatility. The information provided in this section doesn't represent any investment advice or WazirX's official position. WazirX reserves the right in its sole discretion to amend or change this blog post at any time and for any reasons without prior notice.
Participate in the Indian Crypto Movement. Share:
TradingTrends Margin Trading Vs. Futures Trading: Which Is Better? What Is High-Frequency Trading (HFT)? Say Hello to New Way of Travel & Tourism With Metaverse