MATIC: Made In India

Home » All Posts » MATIC: Made In India While many cryptocurrencies like Bitcoin, Ethereum, Tether, etc., have been continuously witnessing highs and lows in the last few months, MATIC, an Indian-origin cryptocurrency that has been under the radar for a long time, has gained huge prominence in the crypto space and many savvy investors are on the lookout for it.

Originally launched back in 2017 by the name MATIC Network (now Polygon), it is a platform designed around the Ethereum blockchain that can create and develop other decentralized apps.

It is a Layer 2 scaling solution that gains scale by using side chains for off-chain computation while also ensuring security by utilizing the Plasma framework and PoS (Proof of Stake) validators.

To better understand it, let’s look at some of its basics and how it operates.

MATIC, now known as Polygon, is an Ethereum token that is used in the functioning of the Polygon Network, an Ethereum based multichain scaling solution. MATIC Network is the ultimate framework to improve the interoperability between the Ethereum blockchain and other compatible networks and has recently seen a substantial increase in its traffic.

According to the company’s price predictions, MATIC tokens could reach $9.41 by the year 2028. Since February, the Network has witnessed more than a tenfold increase in its market cap thanks to its increased use in NFT (Non-fungible tokens), gaming, and DeFi (Decentralized Finance).

What is MATIC (Polygon) Token?

Unlike its counterparts Ethereum and Bitcoin, the MATIC coin or Polygon is not affected by high transaction costs owing to congestion. It is an open-source technology that provides developers with the tools they need to create a standalone network or secure sidechains using smart contracts and the security given by Ethereum’s network.

During the last week of May, MATIC’s market capitalization surpassed $10 billion and is currently among the top 25 crypto tokens in the world, with a fully diluted market cap of $11 billion, according to Coinmarketcap.

The MATIC currency started being traded in Coinbase this March and has become a priceless network due to providing a platform where Ethereum developers can construct their own apps on the Ethereum blockchain more cheaply and rapidly.

This native currency of Polygon was founded by three Indian software engineers – Anurag Arjun, Jayanti Kanani, and Sandeep Nailwal. The startup is based in Mumbai.

It was developed to solve and answer some of the biggest challenges faced by Ethereum today – that is, heavy fees, low transactions per second (TPS), and poor user experience. Its two-layered scalability platform is aimed to create a multi-chain ecosystem that is Ethereum blockchain compatible.

Initially, the project began as the MATIC network but was later rebranded as Polygon when its influence and scope expanded. It is designed to provide different blockchains that can exchange value and information freely.

Although it has already found its place in the top 15 cryptocurrencies globally, the founders of MATIC have larger ambitions to make it the 3rd largest crypto project after Bitcoin and Ethereum.

There are many reasons behind the significant rise of MATIC, including the growing hype around it, Mark Cuban’s investment, and Google BigQuery announcement.

How to buy MATIC (Polygon) in India?

MATIC (Polygon) trading is available on WazirX. WazirX is one of India’s most trusted Bitcoin and cryptocurrency exchange platforms with best-in-class security, superfast KYC, lightning-speed transactions, with efficient and straightforward design available across all platforms.

Why is MATIC gaining traction? 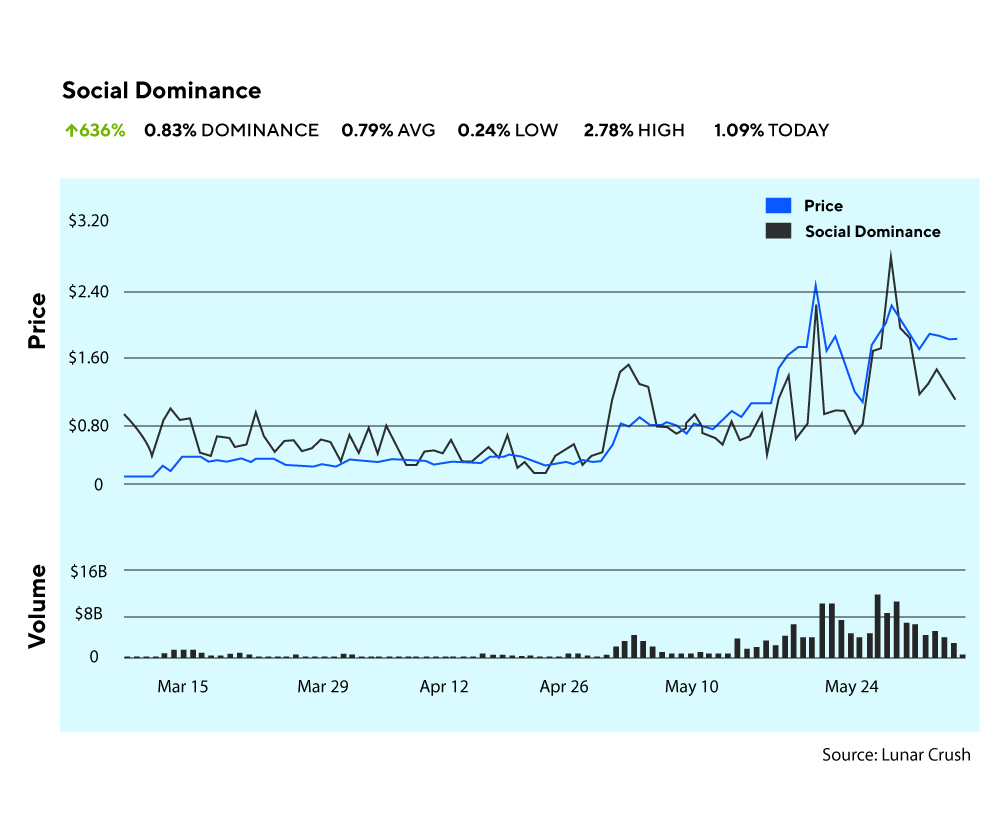 The increasing adoption of MATIC seems to elevate the overall sentiment of investors in the crypto market. LunarCrush stated that MATIC’s dominance on all the social media platforms has increased by 636% from March to April, meaning that the investors have been giving more attention to this currency than ever before.

While Vitalik Buterin’s donation to India’s Covid Relief Fund has helped MATIC gain some visibility, the worth of its token can’t really be credited to one event. Rather, the growth is occurring more because of the big surge in DeFi apps worldwide, like Maker and Uniswap.

MATIC’s solution is built to help decentralized apps and gain users fast and more effectively. It is being used in various apps such as games, marketplaces, and more.

Additionally, an increase in its scope of work and adoption combined with real-world utility and expanded vision has created a snowball effect for the cryptocurrency.

MATIC’s limitless growth so far has been somewhat due to the sudden rise in popularity of the Ethereum network and its adoption. The availability of a faster and cheaper transaction option in the network is a big selling point for MATIC and generates a much anticipated public perception and hype around its price.

MATIC’s brilliant success in the crypto space just comes to show how excellent foundations in a cryptocurrency with innovative ideas and real-world solutions can indeed attract valuable customers, developers, and investors to it, and thereby grow itself and the technology together in a productive fashion.