Why is Crypto (actually) less harmful to the planet than what one thought?

Home » All Posts » Why is Crypto (actually) less harmful to the planet than what one thought? Cryptocurrency has been the target of much criticism and scrutiny for as long as it has existed. Some of the most prevalent objections leveled against cryptocurrency are that it damages the environment and promotes illicit activity.

In the former case, a dominant narrative has been developed about cryptocurrency ruining years of work for sustainable energy consumption and portraying the business as an energy-guzzling machine. However, it appears that cryptocurrencies may be less destructive than previously imagined, with the old financial system being the true cause.

Is The Banking System the Real Culprit?

Earlier this year, Tesla CEO Elon Musk declared that the company would no longer accept Bitcoin as a form of payment, despite previously promising that it would. He cited the Bitcoin network’s high energy usage as well as a lack of want to contribute to the planet’s collapse as reasons for this.

This was the latest in a long line of accusations that bitcoin was wasting too much energy in the mining process, with the global crypto business reportedly consuming as much electricity as that done by countries as a whole. The traditional banking industry, on the other hand, appears to consume more energy.

According to new research from Galaxy Digital, a crypto investing firm, this is the case: The Bitcoin network’s total usage is estimated to be around 113.89 Watts per hour. The University of Cambridge Center for Alternative Finance, on the other hand, consumes roughly 128 Watts per hour, which is more than the entire Bitcoin network. 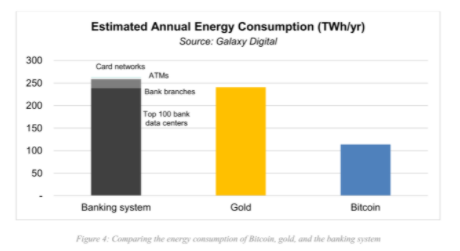 Cryptocurrency has gained popularity and awareness worldwide over the years, which means it is increasingly scrutinized. After all, one of cryptocurrency’s key goals is to complement the present mainstream financial system.

As a result, its inner workings, including how it consumes energy, are continually scrutinized. The majority of the attention paid to the mainstream financial industry is focused on malpractice or fraud and not on its energy.

There is also some concern about the long-term consequences of widespread bitcoin adoption. Millions of people who utilize traditional financial systems are concerned about the long-term energy implications of switching to cryptocurrency, which is contributing to increased scrutiny of bitcoin.

With the rising trend of industries attempting to achieve carbon neutrality, the concerns have added on. Consequently, the cryptocurrency sector has frequently been critiqued for its lack of similar initiatives. But what exactly is carbon neutrality? To be “carbon neutral,” we must remove as much CO2 from the environment as we emit, achieving a balance between carbon output and carbon absorption from the atmosphere. As a result, no process is regarded as fully carbon neutral.

Even the production of renewable energy generating machines such as solar panels and windmills is not completely carbon-free. The only time carbon neutrality is genuinely reached is when the entire process is paused.

Now that more proof is emerging that bitcoin is not as hazardous to the environment as previously feared, the business may be examined less in the future. Simultaneously, a lot of crypto initiatives are already attempting to become more energy-efficient and sustainable.

Earlier this year, the Ethereum Network stated that it would move to a proof-of-stake protocol, which requires less energy than the current proof-of-work methodology. A committee has also been formed to find ways to make the Bitcoin network more energy-efficient, and if it succeeds, the industry will have an easier time – migrating into the mainstream.

While the industry still has a long way to go, it is clear that misconceptions about its energy use are being dispelled, and as the world moves towards a more sustainable future, more attention will hopefully be paid to mainstream institutions that are harming the environment through their operations.

On the other hand, the cryptocurrency industry is adjusting to the green future as it goes global and sees more traction in terms of users. This legacy of adaptability and change will be evident in the coming decades when cryptocurrency becomes more closely associated with the eco-friendly economy, especially in contrast to the mainstream financial world.