It hasn’t been long since traders and investors in the crypto market started using technical analysis as a tool to maximize profits. There are several terms associated with the technical indicator called the moving average or MA, one of which is the Golden cross.

Let’s explore more about the golden cross and what it tells us about a market. 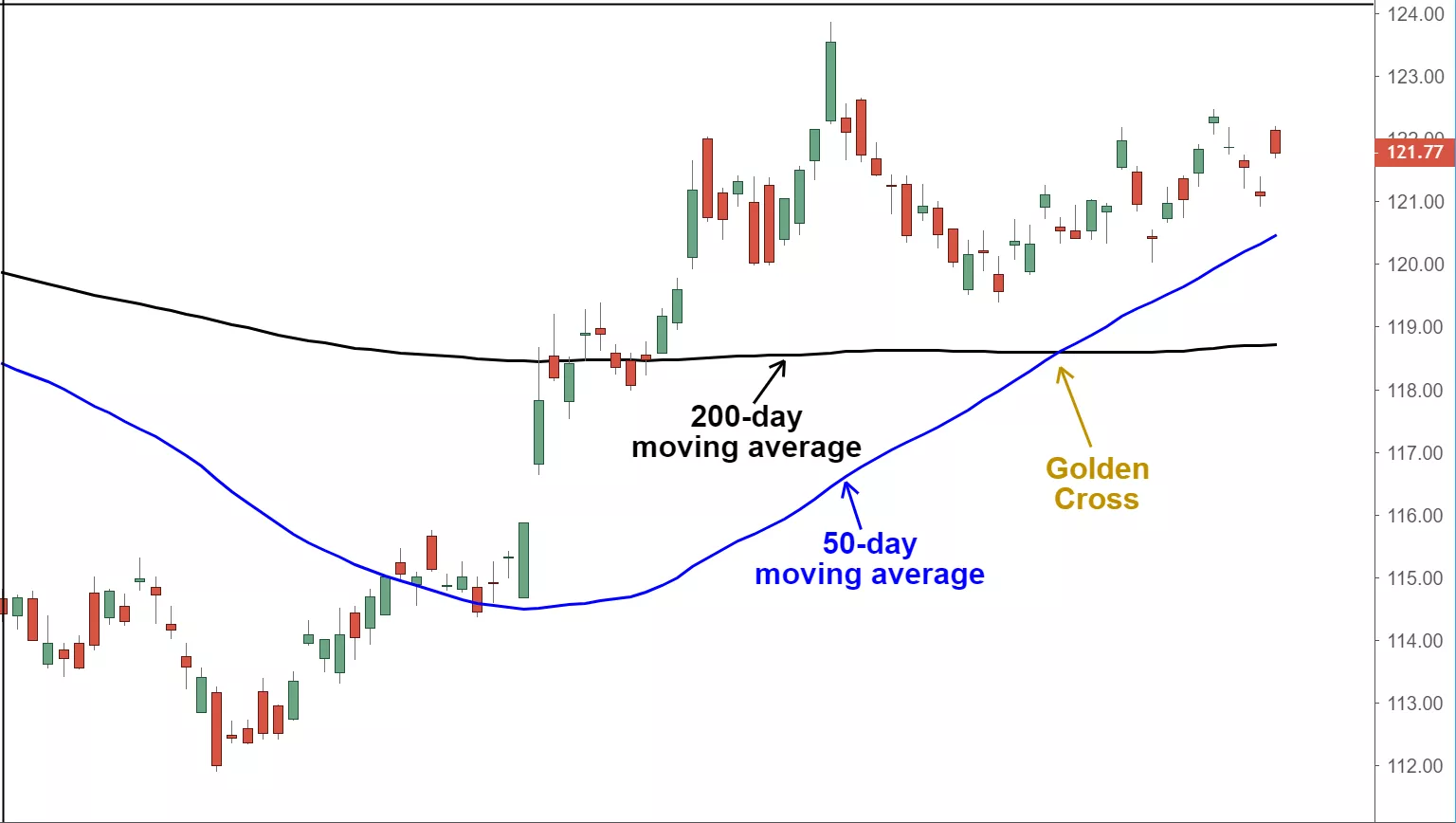 A golden cross is a technical chart pattern that indicates the potential for a major rally, i.e., a bullish breakout pattern that is formed by the crossover of a security’s short-term MA that breaks above its long-term MA or resistance level.

Since long-term indicators carry more value, the golden cross pattern indicates an impending bull market that is bolstered by high volumes of trading. It can be distinguished with a death cross which designates a bearish price movement.

What Does a Golden Cross Tell Us?

The moving averages play the part of support levels on pullbacks till they crossover back down, after which a death cross may form. Death crosses are the absolute opposite of golden crosses since here, the shorter moving average crosses down, the longer one.

The most frequently used moving averages are the 50-period (shorter) and the 200-period (longer) moving average. The periods tell us the particular time increments. Usually, longer time intervals tend to form stronger and lasting breakouts, like the S&P 500 period crossovers, which is one of the most prominent bullish market signals.

A golden cross is seen after a rise in the market, but since it is a lagging indicator, it’s difficult to know when there is a false signal until after the fact. Traders generally use a golden cross as a proof of a signal or trend in alliance with other such indicators.

A golden cross and a death cross can be differentiated easily since they’re polar opposites; one’s an indicator of a long-term bull market while the other indicates a long-term bear market. Both indicators refer to the pertinent formation of a long-term trend by the crossover of a short-term moving average over a long-term one.

Analysts and traders interpret the golden cross as a definitive signal of an uptrend in a market. In contrast, death crosses are considered to be a decisive signal of a downtrend in the market. Either of them is understood to be more significant when combined with high trading volume.

The Limitations of Using Golden Crosses 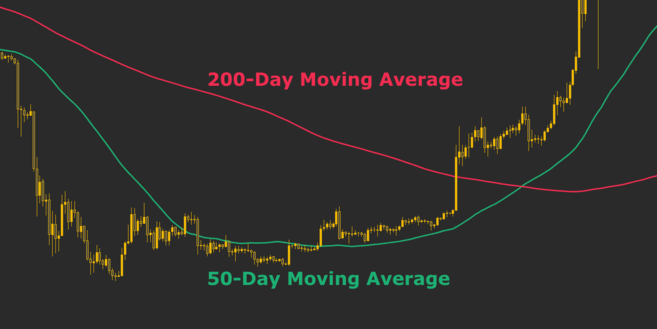 All the technical indicators are ‘lagging,’ and no indicator truly predicts the future of a market perfectly. There are many occasions where a golden cross has produced a false signal. Golden crosses are still subject to failure despite its strong predictive ability in speculating prior long bull markets.

Therefore, you should always confirm a golden cross with other indicators and signals before committing to a trade. The secret to using the golden cross indicator correctly along with other filters and indicators is always to use ratios and risk parameters. This way, you get to time your trade properly by keeping a favourable risk-to-reward ratio, which leads to better results than just blindly following a golden cross. 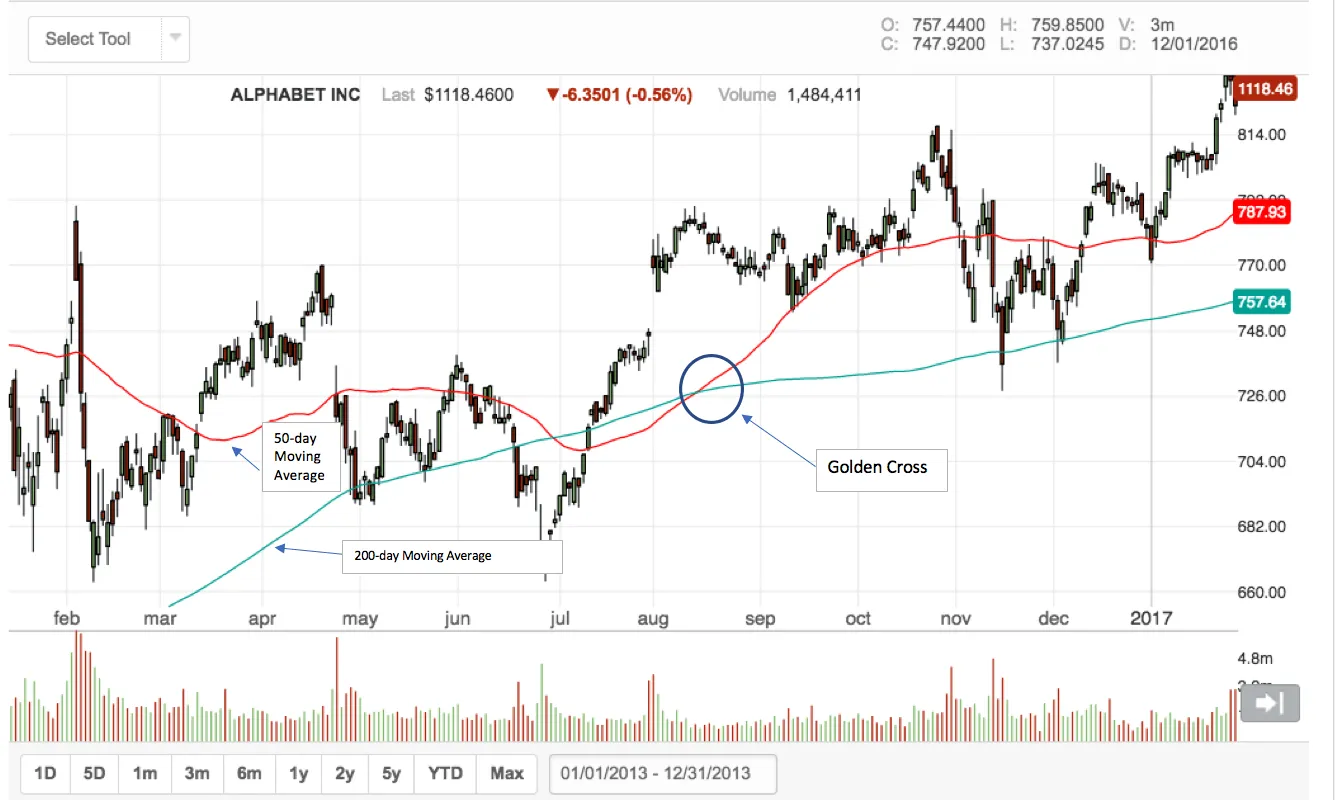 Golden crosses occur when short-term moving averages cross over long-term ones to the upward direction that traders and analysts interpret as a positive uptrend in the market.

A golden cross is a powerful and useful trade indicator, but that doesn’t mean you should buy in on every cross you see in the charts. You’ll need to research and learn a lot more to understand the level of sophistication and complexity that goes into successfully predicting and making profits from technical indicators of a market.

Disclaimer: Cryptocurrency is not a legal tender and is currently unregulated. Kindly ensure that you undertake sufficient risk assessment when trading cryptocurrencies as they are often subject to high price volatility. The information provided in this section doesn't represent any investment advice or WazirX's official position. WazirX reserves the right in its sole discretion to amend or change this blog post at any time and for any reasons without prior notice.
Participate in the Indian Crypto Movement. Share:
CryptocurrenciesTrends