How is Bitcoin becoming the new Gold for the new generation of Indians?

Home » All Posts » How is Bitcoin becoming the new Gold for the new generation of Indians? Diwali 2021 is just around the corner, and many Indians will buy Jewellery for their loved ones. Indians love gold, and gifting gold jewellery has become an auspicious event in any Indian festival. But this Diwali, many Indians are ditching gold (at least as an investment instrument) and thinking about crypto investments.

This begs us to ask a few questions that will take us on a journey of understanding what gold is and why bitcoin is being called gold 2.0! But before that, it will be helpful to understand a brief history of gold and its properties.

What is Gold? And what is the history of Gold?

From the very beginning of time, this shiny metal has attracted humans. Gold has been used for jewellery for thousands of years. Because it is malleable, gold becomes the perfect shiny metal to mould into beautiful ornaments. But it was only after 1500 BC that gold was slowly being used as a mode of exchange in Egypt. Its mysterious ability to attract people worldwide independently of each other allowed it to become a medium of exchange.

Why is Gold a “Store of Value”? And what does it mean?

Gold became a store of value when the gold standard (a monetary system in which the U.S. Dollar was based on a fixed quantity of gold) became prominent in countries worldwide. With this system, anybody holding some amount of “paper money” could go to a bank and exchange that for a fixed amount of gold. And this helped increase the legitimacy of gold and its perceived value in people. Image Courtesy: A Brief History of the Rise & Fall of the Gold Standard

What this meant was there was a growing generation with an ever-increasing belief in the value of gold. Although every nation of the world has completely abolished the gold standard today, this has not changed people’s thoughts worldwide. Gold is still perceived as a symbol of stability in value, an unchanging and reliable investment instrument. This is the meaning of – store of value.

The mentality of traditional investors of the year 2002

The price of gold was approximately Rs. 5,000 per tola in 2002. Today the price of gold is north of Rs. 50,000. Not to mention that 1 tola of gold is now 10 grams, and earlier, it was 12 grams. Any reasonable investor who has gone through this journey of asset growth will think that the price of gold will always keep increasing. That could be true, but at what speed? When everything happens at lightning speed in today’s world, are the new generation of investors willing to wait for almost 20 years for just 10x growth?

Ask a crypto trader how much he makes in a crypto bull run, and you will get the answer. And ask a crypto investor how much returns he has had on Bitcoin in the last 3 years? Or how much he expects in the next 3? The mentality of the new Indian investor is not the same as that of the traditional investor from 2002. Perhaps because they have seen the inside of the honeycomb of bitcoin, and it is sweeter.

What makes Bitcoin the Gold 2.0?

Some crypto experts argue that Bitcoin is multi-folds better than gold. Let’s look at the properties of gold that makes it a good investment (and why Bitcoin is better)

As we dig deeper into this rabbit hole, it becomes increasingly understandable why the new Indian investors are calling Bitcoin the new Gold 2.0 of the world. 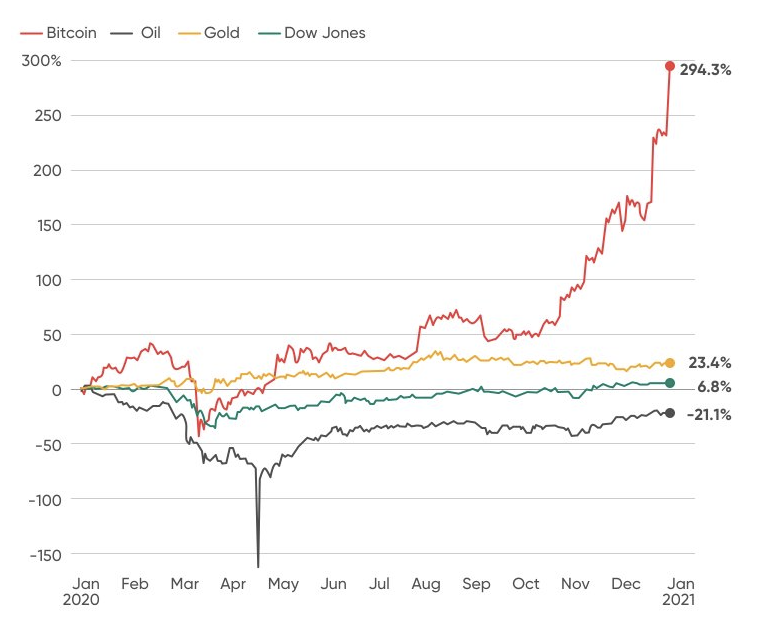 How does Bitcoin help in reducing the impact of Inflation?

Inflation is the steady decrease in money purchasing power – in the world’s current monetary system. After World War 1, when The Gold Standard was abolished, Apex banks worldwide found themselves juggling to manage the interest rates in the economy.

Cost of Capital is the minimum return on investment that a company would need to do a project if it takes a loan or debt for that project. The rise in inflation leads to a rise in risk-free return (or the returns that you expect on your FDs), and that in turn leads to an increase in the interest rate of loans/debts and hence an increase in the cost of capital. Companies around the world are facing the problem of increasing the cost of capital.

For normal citizens, the inflation rate has been increasing too. If you consider the cost of having the lifestyle you live right now and compare it with that of 5 years ago, you will realise that your inflation is more than 15-20% every year. After all, you did not spend on monthly subscriptions of Netflix, Amazon Prime, Google Drive, Apple products, that fancy gym membership and your new car.

Consider this: let’s assume you earn 10 Lakhs per annum and spend around 8 Lakhs of your yearly income to sustain the “lifestyle” you live in. If we assume that everything will become just 70% more expensive in the next 5 years, you will probably need a salary of around 17 lakhs – a 70% salary hike that an average Indian is not even dreaming of!

PS: The cost of hedging against inflation using bitcoin is much cheaper than that in gold.

Disclaimer: Cryptocurrency is not a legal tender and is currently unregulated. Kindly ensure that you undertake sufficient risk assessment when trading cryptocurrencies as they are often subject to high price volatility. The information provided in this section doesn't represent any investment advice or WazirX's official position. WazirX reserves the right in its sole discretion to amend or change this blog post at any time and for any reasons without prior notice.
Participate in the Indian Crypto Movement. Share:
BasicsBitcoin

Rohit is a Certified Blockchain Expert and holds an MBA in Finance and PGd in Blockchain Technology from IIIT-B. His journey in crypto began in mid-2017 when he got his first few satoshis. He is also known as @cryptorohittt in his education-centric crypto community 'Blockchain Noodles' on Telegram.